Sky High Gallery is very excited to bring you an exclusive interview with Seattle based artist Stacey Rozich who's illustrations define the achingly dark and beautiful new Fleet Foxes music video for "The Shrine / An Argument". Released just yesterday, a full 8 minutes long, the piece already has over 100,000 views.

The work of Stacey Rozich first came into my field of vision like so many other artist I adore via Meighan O'Toole's blog My Love For You. From there I purchased a piece of her work for a Gulf Fundraiser, later we started corresponding, then met up while I was on a visit home to Seattle & this past March she had a solo show here in Milwaukee at Sky High. Obviously I was excited when I caught wind of her teaming up with Fleet Foxes for an animated project and was blown away when I saw the outcome. I couldn't really imagine seeing Rozich's work in motion, but Stacey and animators Sean Pecknold & Britta Johnson have created another world.

In the short period of time I have been following Rozich, her work has already spoken for itself. I am confident this collaboration is a notch in a long timeline of incredible work she is going to produce in her life. I am thankful that I have had the opportunity to work with her and look forward to what's next. This very personal interview is such a great inside look of what it's like to be a working artist. I really appreciate the time, honesty and thoughtfulness in every answer. Enjoy. My west coast roots are swelling with pride on this one.

Had you listened to Fleet Foxes and/or heard the song before you were approached for the video idea? How did they find you?

ROZICH: I had definitely heard them before, a good friend of mine gave me their LP "Sun Giant" in 2008 and I fell in love. I was just starting to grow my style into what it is today and I felt like their music was a perfect soundtrack for me to illustrate to; I had never heard anything that stuck me like that. Fast forward to earlier this year when I was with the rest of their fans waiting quietly for their sophomore release, when Sean (Pecknold, the director) and Robin (lead singer) both e-mailed me within about 10 minutes of each other asking if I was interested in lending my style to a music video for their as-yet-to-be released album. I was pretty floored, I guess my eyes just went really big and I got kind of silent with awe. I regained composure and e-mailed them back that yes, I would be very interested to work with them. From our first meeting Sean and Britta (Johnson, the other animator) played me the song in their tiny studio. We all sat there in close quarters while this 8 and a half minute epic unfolded. I had never heard anything so gorgeous with so many movements, at least in current rock music. It felt so cinematic and narrative; I could see the visuals in my mind's eye. I knew this would be a big project.

What was the process working on this project like? (i.e. time-line, etc )

ROZICH: Wonderful, difficult, challenging, amazing, hilarious, tiring, inspiring – just doing some word association with the project. I was in my last year of this really intense design program in Seattle and when I got the offer to work with Sean and Britta for the Fleet Foxes, I knew I could not turn this down. But being in such a rigorous school schedule did make things a lot more drawn out. I would go to school Monday - Friday for 6 + hours and then Friday afternoon I would haul ass down to Portland (where our studio was set up) to work all weekend. It was hard I suppose, but once I got into the windowless studio it was like time and any other life drama was suspended and it was time to get down to business. This went on from March - early August with a few short breaks. My part was probably the shortest, too. Britta and Sean are so dedicated and passionate about their work that they worked the long 12 hour days for weeks, months. While I would get cranky about being in school and doing this, I knew I should probably shut it because I technically had a lot smaller load to bare.

How involved were you in the creative process? (maybe mention being in the studio, did you have to do multiple sketches for each frame, etc)

ROZICH: I was pretty involved in the creative process, the first two months of this project was spent having meetings every two weeks or so about the concept, story board, character design. I did a lot of doodling on the spot, kind of like a police sketch artist. Sean would tell me what he was imagining for a certain character and I would sit their and scribble something out and then show it to them. Once we got the characters nailed down (or mostly so, they did go through a few iterations) and we were settled into the Portland space, I got to work doing multiple angles for each character. And there were over a dozen characters.
Did you see process animated clips before seeing the final video? What were you initial thoughts when you saw your characters in motion?

ROZICH: I saw a few bits here and there, but I didn't press Sean to show me. I knew he had a way of working and figured I would see it when I got a rough final cut. It was almost like having a big present that I knew I was going to get, however long in the future. The day it officially came out, I watched it, soaked in all the praise and went on with my day. Today though, a day after, I finally set up my desk and computer (I just moved) and saw it on a blog I check often. It was all quiet and I was alone and even though I had seen it 5 times before, I clicked on the video and watched it. I actually got teary eyed! I think that was the first time I felt at peace, settled and ready to take it in. I felt an overwhelming sense of satisfaction and accomplishment. All of these months, all the hard work that was poured into this: it was here. I felt so lucky and like the saying my dad always tells me "hard work pays off" really did...pay off.
As an artist how do you feel this experience has propelled your skills?

ROZICH: This was probably the best exercise for me and my technical skills because I noticed the work I did for myself after that....my lines were so crisp and clean and my lines smaller, more precise. It was those monotonous hours painting hair texture that strengthened my work ethic and ability.

What's next on your plate? Will you continue to show at galleries in the United States, do more freelance design? What's the ideal working artist situation for you?

ROZICH: I have a pretty full plate as of now, I've got many many commissions to get started on/finish. I have a few small contributions to group shows, one is the Doodle Show at Portland's Compound Gallery and another is a hand painted nesting doll for the Matryoshka Show at Seattle's Ghost Gallery. I love nesting dolls so I'm pretty excited about creating my own. On top of that, I'm in the works to start designing a small line of textiles (pillows to start) that I hope will be available in a few stores. I'm starting to think more seriously about gallery representation, but that isn't all the way formulated yet. And yes, of course freelance design. Girl's gotta eat.

ROZICH: Some additional yammering...There were so many funny moments working in such an enclosed space for so many hours with Sean and Britta. One of which always stood out to me is coming in early (I was more of a morning person then) and playing the This American Life episode about siblings pretty loud over the speakers because I was all alone in the building. I was painting away when the segment came on about the two elderly sisters that look alike, dress alike and do everything alike. One was talking about how they both love Ricky Martin and then immediately started playing "Livin' La Vida Loca" SUPER loud and of course, Sean and Britta walk in right at that second. They just look at me and said "Wow, Stacey, uh..." Like my excuse to come in early is so that I can play my Ricky Martin so no one knows. Busted! Also another good moment was when we walked out the of the studio building and into a parade. Not something that happens every day.

Alright, if you haven't already watch the video. Watch it big & loud.

The Shrine / An Argument from Sean Pecknold on Vimeo. 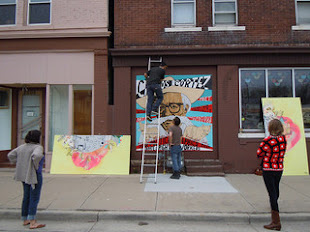